Emraclidine, a novel positive allosteric modulator of cholinergic M4 receptors, for the treatment of schizophrenia: a two-part, randomised, double-blind, placebo-controlled, phase 1b trial 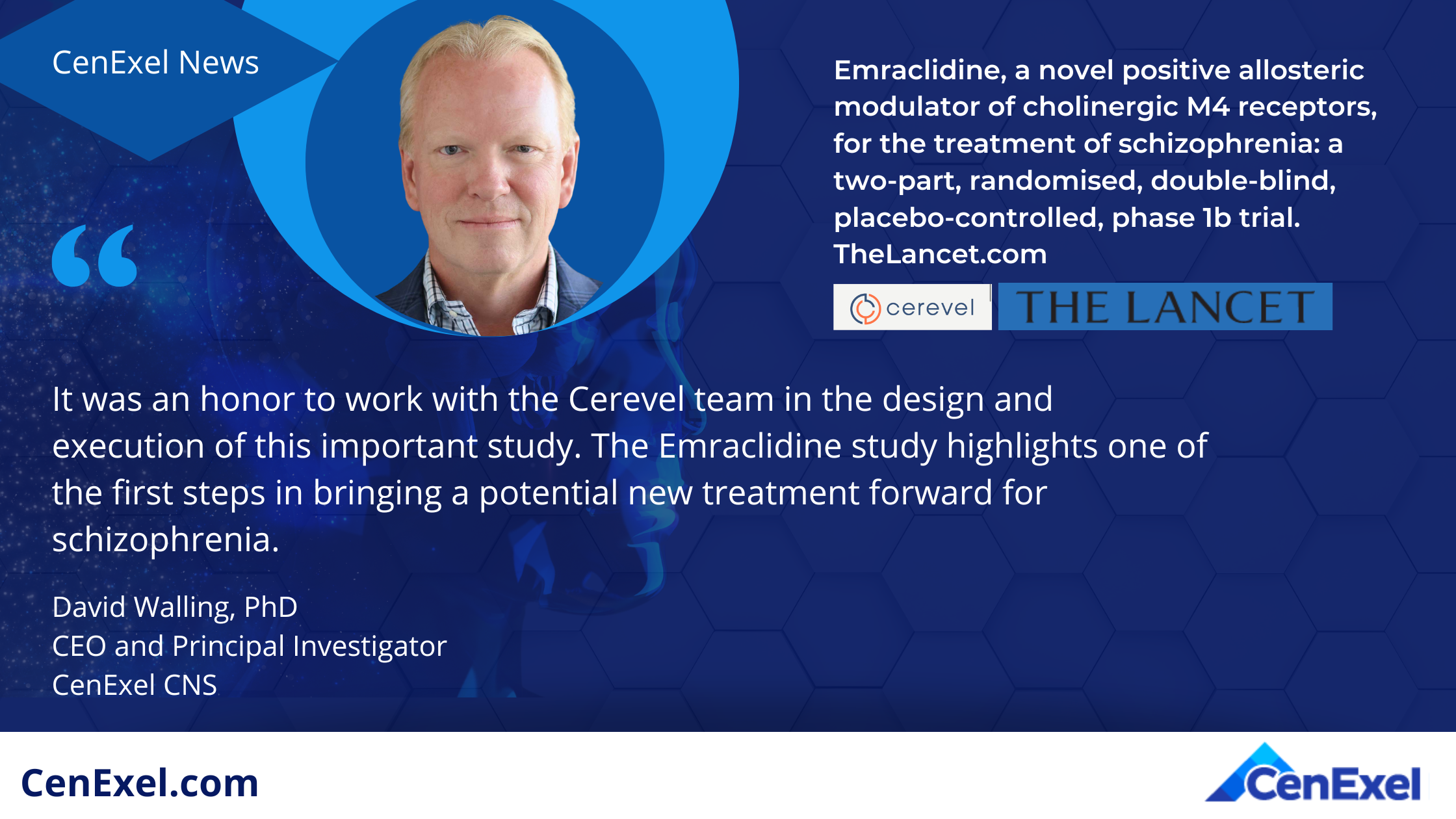 CenExel is proud to announce that the work of David Walling, PhD, CEO and Principal Investigator at CenExel CNS, joined lead author, John H Krystal, as co-author of the recent Cerevel Therapeutics study titled, Emraclidine, a novel positive allosteric modulator of cholinergic M4 receptors, for the treatment of schizophrenia: a two-part, randomised, double-blind, placebo-controlled, phase 1b trial, published in The Lancet.

Cerevel conducted a two-part, randomised, phase 1b trial in the USA. Eligible participants were aged 18–50 years (part A) or 18–55 years (part B) with a primary diagnosis of schizophrenia per the Diagnostic and Statistical Manual of Mental Disorders 5th edition, as confirmed by the Mini International Neuropsychiatric Interview, and extrapyramidal symptom assessments indicating normal to mild symptoms at screening. Part A – evaluated the safety and tolerability of emraclidine in five cohorts of participants with stable schizophrenia who received ascending oral doses of emraclidine 5–40 mg (40 mg was administered as 20 mg twice daily) or placebo at CenExel CNS, which served as the single US site.


Part B was a double-blind, randomised, placebo-controlled study that enrolled adults with acute schizophrenia across five US sites; participants were randomly assigned (1:1:1) to receive emraclidine 30 mg once daily, emraclidine 20 mg twice daily, or placebo for 6 weeks (doses established in part A). The primary endpoint was safety and tolerability, assessed in the safety population (participants who received at least one dose of emraclidine or placebo). This trial is now complete and is registered with ClinicalTrials.gov, NCT04136873

When asked about his participation in the study, Dr. Walling said, “It was an honor to work with the Cerevel team in the design and execution of this important study. The Emraclidine study highlights one of the first steps in bringing a potential new treatment forward for schizophrenia.”

Learn more about Dr. Walling and his team at CenExel CNS.